The death of my initial Query Quarry idea is a good thing. The new Query Quarry direction is exclusively a Generic Inquiry Data Warehouse for Power BI.

Update (January 23rd, 2019): I’m keeping the post on this page in place for now, but click here for the latest on Query Quarry.

My original goal was to launch Query Quarry by the end of September (just a couple of days away). As with all projects, as the deadline approaches you begin to get more and more serious about it.

I wanted to launch something, even if it wasn’t that great, to at least get an initial version of Query Quarry out there and off the ground. And I was getting close to having something…

But then I attended the Acumatica Roadshow here in Columbus last week.

During the demos of Acumatica 2017 R2, they showed the new user interface which looked really nice. Much better use of screen real estate, easier navigation, etc. For all of my notes on the demos, with screenshots, see the post from a couple of days ago (click here).

One of the things they showed was that now more of the data entry screens have been replaced with lists. This is a feature that has been available for quite a while and you use it with the ENTRY POINT tab on the Generic Inquiry screen pictured here: 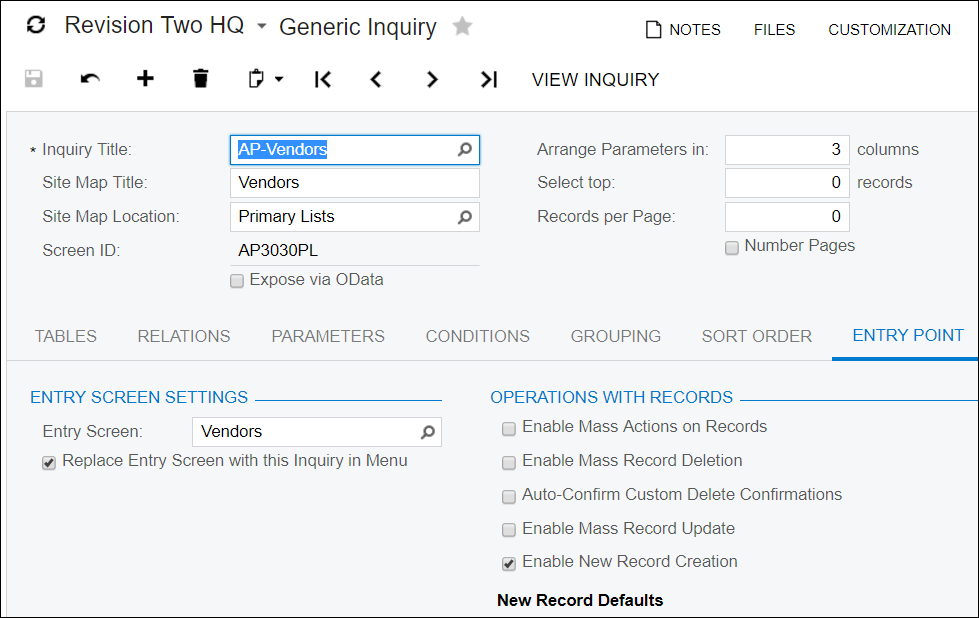 If you turn on Entry Point, when a user goes to the screen, say the Vendors screen for example, they no longer see the data entry screen like this: 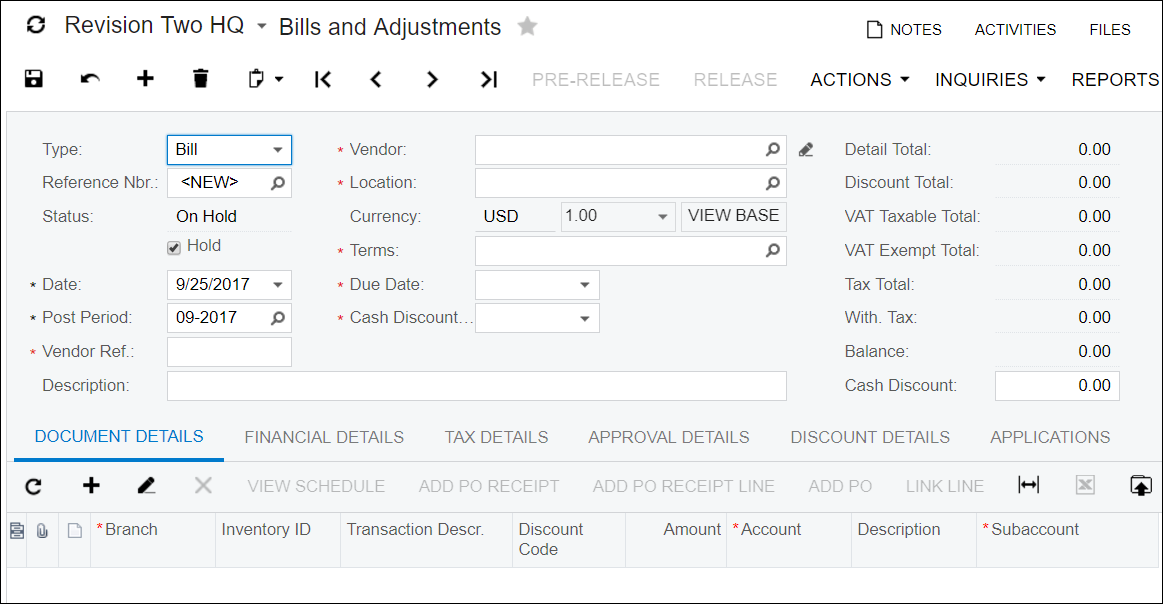 Now, when they go to the Vendors screen, they see a list like the one pictured here. Of course, they can still get to the data entry screen by clicking on a Vendor hyperlink or the + highlighted below with the red arrow. 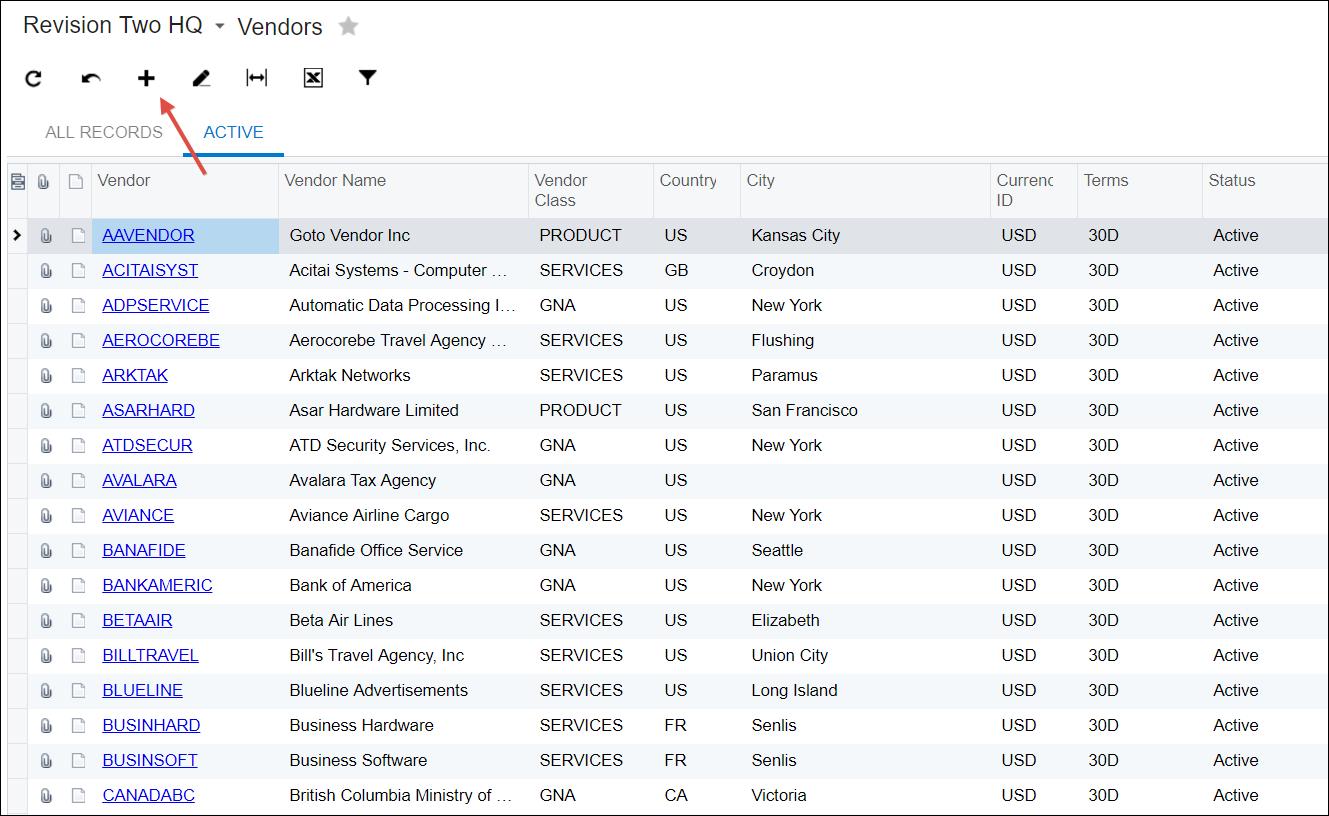 If you think about it, most of the time when you go to a screen, your first action is to click the magnifying glass to look something up. Entry Point basically gives you that functionality when you first go to the screen, saving you a click.

But the bigger thing that you get here is the ability to modify the stuff that is shown in the list. You have to be a programmer to modify the columns available in a magnifying glass. But since the Entry Point lists are just Generic Inquiries, you have full control over the columns displayed.

I thought it looked cool and was a good idea. Then we looked at tons of other things and I almost forgot about it.

But after I got home I realized that there was a lot more to this than met the eye.

Why so many new Generic Inquiries? Well, they are needed by the new lists on the data entry screens. You can see what I mean if you use the new user interface in Acumatica 2017 R2 by clicking your username, then Switch to New UI like this: 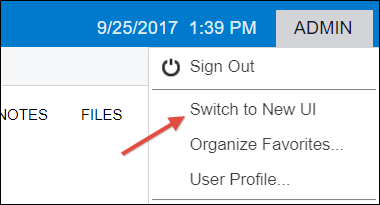 You will find it difficult to find a data entry screen that hasn’t been replaced with a list.

Seriously, take one of the more trivial screens, like Kit Assembly in the Inventory module, for example. It now looks like this when you go to it: 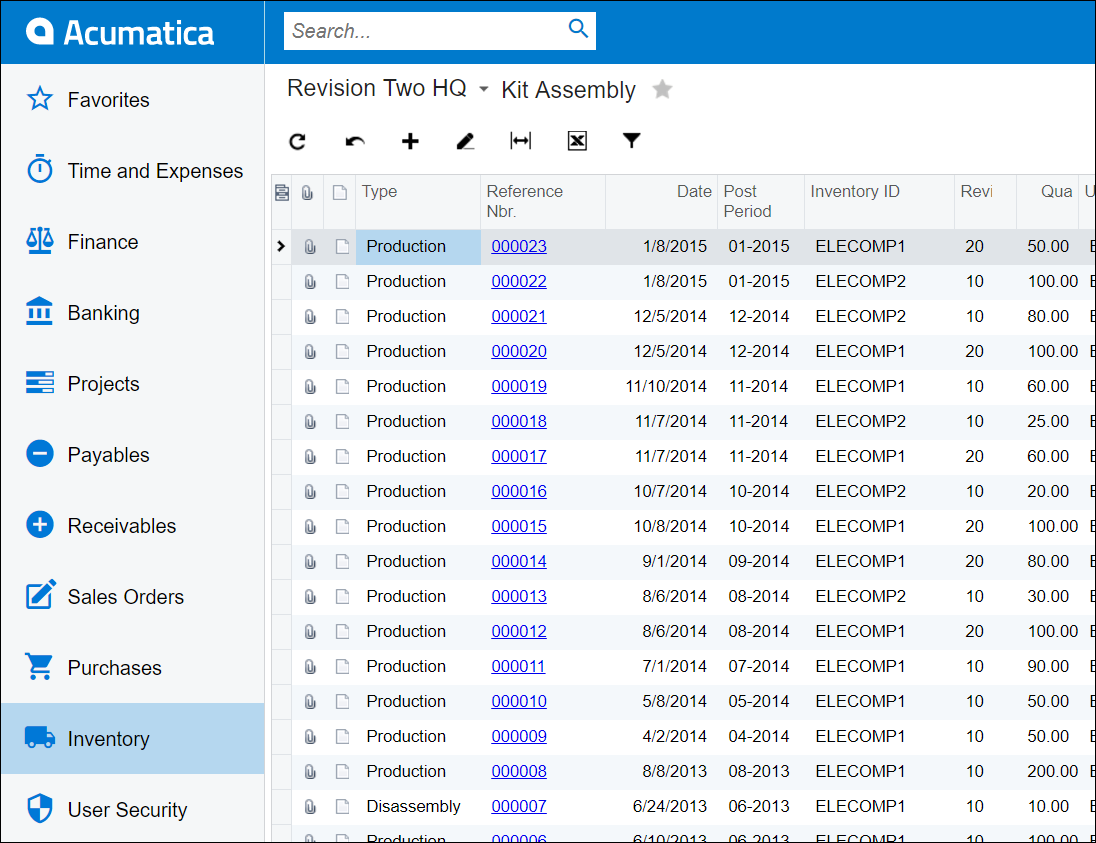 So it makes sense why there are now over 130 Generic Inquiries available out-of-the-box.

But, wait, I hear you saying, “ya, that’s great, but it’s only available in the SalesDemo database.” That was my first thought too. So I created a brand new empty company. And, guess what, I still counted over 130 Generic Inquiries!

Also, if you’re wondering, I don’t see any reason why you couldn’t export the Generic Inquiries that you like into an Acumatica 6.1 environment since I doubt that the table structures have changed that much.

Still wondering? What if you make a change to each Generic Inquiry, would it then show up in the Generic Inquiries area of the Customization Package? You betcha! So, one workaround could be to do something really minor to each new 130+ out-of-the-box Generic Inquiry like checking the Default Navigation checkbox on the RESULTS GRID tab for the first field in each Generic Inquiry. Then you could package them all up into a Customization Project and try deploying to an Acumatica 6.1 environment. I’d love to see how this goes in the comments below.

Still wondering, seriously? Then please do leave a comment below.

How does this relate to Query Quarry? Well, the whole idea of Query Quarry was to create a Generic Inquiry for every data entry screen in Acumatica.

So much for that idea 🙂

Now, instead of creating these Generic Inquiries, we just need to provide feedback to Acumatica for stuff that we want added to this new base set of over 130 Generic Inquiries. Maybe I’ll add a forum to ARC for this (click here) so we don’t clutter up the Acumatica Ideas Website.

But I’m not too sad.

First of all, I’m glad that I found this out before launching my 1st version of Query Quarry. And I found out just in time.

Second of all, this allows me to still create Query Quarry, but design it for what I really wanted to do in the first place.

My main reason for building Query Quarry originally was for the sake of Power BI because so many people want to use Power BI, but they don’t know how to get started.

I only went with the screen-based idea for Query Quarry because I thought that would make the most sense for all of the other additional things that you can build on top of Generic Inquiries. But, it really isn’t the best idea for Power BI.

With Power BI, the structure of screens really isn’t the best for the Star Schema that Power BI works best with.

So now I’m re-thinking Query Quarry in a way that would work better with Power BI and a Star Schema. Basically, how to hyper-focus Query Quarry as a Generic Inquiry Data Warehouse for Power BI.

Also, I realized that I was coming at this from the wrong direction. I was trying to build the foundation of Generic Inquiries first, then go out and apply them to real world situations.

Now I’m thinking that it would be better to go in the opposite direction. How about starting with some blog posts with real world things built in Power BI. Then the Generic Inquiries that I used to build those examples will become Query Quarry, a Power BI friendly set of Generic Inquiries that get added to incrementally over time and that have real world Power BI examples already built on top of them.

So, the initial Query Quarry idea got killed by the new Acumatica 2017 R2 out-of-the-box Generic Inquiries.

But this is a good thing.

Now Query Quarry can be laser-focused on Power BI, the main thing that it was originally intended for.