Acumatica vs. Sage Intacct. Thoughts on what this means going forward for Acumatica in the wake of the news 7 days ago that Sage acquired Intacct.

Update (August 7th, 2017): This post is admittedly Acumatica friendly since I’m an Acumatica guy, but my friend Walter Goodfield wrote a response from the Sage perspective. Reading his post (click here) and the one below will give you perspective from both sides of the aisle. 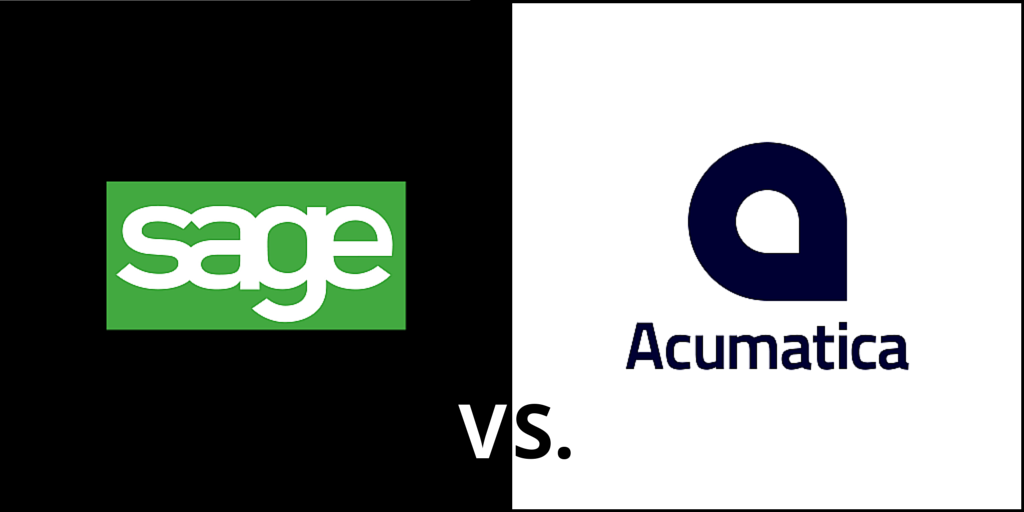 Right now my blog posts are pretty much focused on reporting in Acumatica.

But, as a former Sage person myself, I couldn’t resist putting my thoughts down on the recent news from 7 days ago that Sage acquired Intacct.

If you’re an Acumatica fan like I am, then you definitely took note. Here are a few articles on the story:

Sage has been asleep at the wheel for the last 10 years in the Midmarket in my opinion. Sage Live is on the lower end and Sage X3 is on the higher end. The products in the middle of the Midmarket (Sage 100, Sage 300, and Sage 500) were dinosaur products with no future and it seemed that Sage had no way to fill the gaping hole in their portfolio (except by acquisition of course, which they just did).

Because of this gaping hole, Acumatica has been mopping the floor with Sage partners, adding them like crazy as they abandoned the sinking Sage Midmarket ship, especially in North America.

NetSuite pretty much exited the Midmarket when they got acquired by Oracle and Dynamics 365 ERP for the Midmarket is still likely a couple years away from coming together as a product, so Intacct was left as the only major competitor for Acumatica.

Now, that all changes with Sage acquiring Intacct.

Now, Sage can bend the ear of the partners in their channel. Even if those partners are already rowing away from the sinking ship in life rafts, they are still within shouting distance. And this acquisition is quite a thunderous sound, impossible to miss.

The context of my Sage vs. Acumatica post (click here) from two years ago also changes quite dramatically.

This gives Sage a great opportunity to put what is left of their North American channel back to work.

So this is definitely big news for Sage. It will be very interesting to watch how this plays out.

Here are some thoughts on the acquisition and Acumatica vs. Sage Intacct moving forward:

It’s hard to know how many North American partners will actually be willing to continue to put up with Sage. They know first hand about the revolving door in North American leadership and the continued attempts to roll North America into one overly simplified global scheme.

It’s also hard to know how Sage will merge the “sell direct” Intacct strategy with the Sage North American channel and that will take some time to play out.

If I’m a partner, comparing Sage’s “no strategy” Midmarket strategy in North America over the past 10 years with Acumatica’s consistent 100% channel “steady as she goes” approach since 2008, the choice on who to partner with is no contest.

I personally lived through 10 painful years with a Sage acquired product (Sage 500). It is very depressing to try and build a career on a Sage product because any product that Sage acquires will become stagnant.

Take a picture of Intacct today. Because I can pretty much guarantee that it won’t be much different 5 years from now.

Sage knows how to acquire products, but they are terrible when it comes to actually developing products. They will suck the R&D investment out and dump it into sales and marketing. Acumatica, by contrast, is a technology company and they continue to invest heavily in the product.

Over 75% of Acumatica employee roles are directly connected to R&D according to Jon Roskill at the recent Acumatica Summit (click here). Acumatica is in no danger of becoming stagnant.

Intacct seems to do best-of-breed better in my opinion and we seem to be living in a best-of-breed, or Postmodern ERP, world these days. It’s all about choosing the best applications for the lines of business and then using increasingly more powerful web APIs to handle the integrations.

Intacct seems to have the advantage here because they are hyper-focused on Accounting. That’s all they do, they are extremely tight with the AICPA, they communicate VERY well with CFOs, and they even include a batch of pocket protectors with every new purchase of Intacct (just kidding on that last point).

This seems like a great match for Sage because they have a very strong accountant network. So Sage Intacct is definitly best-of-breed in Accounting.

Acumatica, by contrast, seems all over the map. Acumatica is a bunch of geeks building cool software, but they are spread very horizontally thin across Financials, Distribution, Project Accounting, and Field Service. It’s hard to know if they are “best of breed” at anything other than the technology itself.

Jon Roskill at Acumatica likes to talk a lot about the Multicloud world that we live in. And Acumatica is positioned well for that with a very strong approach to APIs. It’s a VERY open platform and feels downright open source at times.

Although Intacct also has a strong set of APIs, I don’t know enough to speak to the open mindset.

Acumatica exposes basically everything through an API, but the Intacct integration capabilities will likely suffer under the Sage investors who crave their economic moat. Investors are no different from Donald Trump in that they prefer to build walls instead of bridges.

Sage is definitely bigger as a whole and they have a lot of marketing weight to throw around. Intacct has over 11,000 customers according to the second article listed above while Acumatica is just over 3,000 customers based on the last piece of news that I saw (click here).

But Intacct’s customer count doesn’t seem as impressive when you consider that they have been around since 1999 while Acumatica has only been around since 2008. Also, theoretically, the average Intacct deal is smaller since they just do Financials, unlike Acumatica which does the broader ERP suite.

Sage Intacct definitely is bigger, but, when you get into the details, you start to wonder how much bigger. And then there is the wildly unpredictable Sage shell game that happens each year during budget season. Which Sage product will move forward and which Sage product will get put on the back burner?

So who will really be bigger in terms of team size and ability to grow? I don’t think it’s as obvious as it seems at first glance.

Sage made a big move with Sage Live a little while back. One has to wonder if it was mainly a relationship building play, a stepping stone to acquiring Intacct.

So what happens to the Sage / Salesforce relationship with Sage’s acquisition of Intacct? As far as I can tell, it gets more complicated.

7. One Product vs. One Brand

Sage, on the other hand, has one brand, but a complicated smattering of various software products, both old and new. Within Sage there must be political battles that make passing a budget in Congress seem simple by comparison.

Everyone at Sage in North America is going to be vying for a piece of the Sage Intacct action and I would be concerned that the current Intacct product will eventually become a cyborg collection of random disparate technology pieces whose only claim of cohesiveness is the Sage marketing umbrella and the consistently green Sage color scheme.

8. On Premises vs. SaaS Cloud

Sage is a late-comer to the Cloud game, but the Intacct acquisition probably settles any doubts about their being serious. Sage is all in now.

But they might have over-adjusted. The Sage customer base has been conditioned to an On Premises world, downright lulled to sleep and stupefied by it. And there are still legitimate reasons to stay On Premises. The SaaS Cloud will never take over completely in my opinion.

It’s going to be difficult for Sage to go to their Sage 100, Sage 300, and Sage 500 customers and tell them that their only future is to move to the cloud if they want a product that isn’t merely being maintained on life support. Or, of course, they could stay on their dinosaur products, but that’s two very extreme options.

Acumatica, on the other hand, has one product, but they allow you to deploy On Premises, use the Cloud SaaS version, or deploy to any 3rd party hosting company. It’s the ultimate in flexibility.

Intacct is a SaaS Cloud product and it’s great for now while SaaS Cloud is trendy, but I think eventually the market will come to understand the legitimate scenarios where it makes sense to buy software rather than rent it. I mean, people still buy houses and cars right? Renting didn’t didn’t take over in those industries.

I follow Power BI very closely and Microsoft has figured this out. Power BI started as SaaS only, but more recently there is now an On Premises version because that’s what the market was demanding.

There is the possibility that Sage could open up an On Premises version of Sage Intacct, but I seriously doubt they have the technology prowess to do it (remember, they’re a software acquisition company like a mutual fund for software, not a software development company) and they would very likely encounter some very core technology platform barriers because Intacct was never intended to run On Premises and that assumption is built into the foundation of the product.

Sage has a big edge here. They know how to throw a party, ahem, I mean put on “an event”.

These events are a rare opportunity for Accountants to get out of their cubicles and socialize so they have a big impact on the psyche of the typical Accountant.

Acumatica is still just a kid jumping up and down clamoring for attention when it comes to events.

Sage can hire a couple of well-known speakers, line up a band that can pump a healthy dose of nostalgia through the speakers, keep the alcohol flowing, and melodically whip the Accountant cult into a chant of “Sage Intacct” without ever even having to show the software. It’s annoying, but it’s effective.

Ok, ok, I know I’m being hard on Sage here. But, I admit, they know what they’re doing when it comes to putting on an event.

Alright, I’ve typed enough. These are just some of my random thoughts.

I’m still not sure how to answer this question. However, I do think that this is good for customers because now the competition will be tougher between the Midmarket ERP players. Any company (and Acumatica is no exception) who enjoys too much dominance will eventually get greedy and start taking advantage of their customers. The acquisition of Intacct by Sage puts a check on Acumatica, helping to keep them honest.

I’d love to hear your thoughts below.