Guest Post: Thoughts by Dave Dozer on Traditional ERP, Modern ERP (eg. Acumatica), ERP History, and the importance of ease of use.

Intro from Tim: I first met Dave Dozer (Twitter :: LinkedIn) a couple of years ago at an Acumatica Summit. We made sure to meetup because we both were into ERP and we both lived in Columbus, Ohio. Dave works for Algorithm, an Acumatica and Macola reseller. Recently I met-up with Dave again and some others from the Algorithm team during one of Algorithm’s infamous happy hours at their offices here in town. Dave graciously offered to do a post here on the blog. I especially like his point about muscle memory and I may just start referring to “Legacy ERP” as “Muscle Memory ERP” 🙂

Take it away Dave!

Does ease of use really matter when it comes to ERP (Enterprise Resource Planning) systems? The short and obvious answer is YES! However, as with most questions with seemingly-simple answers, there is also a but in there.

Let’s try answering the question one more time: Yes, ease of use absolutely matters when it comes to ERP. But (ah, there it is) it still needs to handle the complexity of business needs and operations.

It’s a complex answer to a simple question and that answer has also evolved over time. Going back in time, even just 10-15 years ago, the UI/UX (user interface and user experience) were almost an afterthought when it came to ERP development. The core focus was always on functionality and transactional data entry speed. Think about the old green screen AS400 systems or DOS-based applications (Doom withstanding). The ability to tailor the user interface was very limited and the whole purpose of the application was to capture data that previously had to be kept in paper files. So the focus was on keyboard shortcuts and being able to pound in a stack of paperwork as fast as possible. The “ease of use” factor with these systems became muscle memory and knowing that after you enter the customer code you then hit tab then space then enter and then F1, etc. But once the platforms that ERP systems were developed on evolved, so did the interface of the platform.

As platforms evolved, ERP systems did as well, and this is unwittingly what set the stage for the hard-to-use interfaces that traditional ERP systems are fraught with today. Keep in mind that the term ERP really wasn’t a thing until the 90s when Gartner coined it because they needed terminology that referred to systems that had grown into more than just Materials Requirements Planning (MRP) systems. And the term really didn’t become a widely-known acronym until the last 5-10 years. Most software developers started creating applications focused on a specific competency like inventory, planning, or financials and then branched out from those areas. As new programming tools became available they were able to add more and more features to their applications and grew them into robust programs that were able to manage multiple aspects of the business. This was a very good and revolutionary thing.

However, technology then began to speed up too fast as everything started to move to the cloud. Day-to-day consumer products moved from being on the desktop to being offered in the cloud. Then targeted business applications such as CRM (Customer Relationship Management) moved from the desktop to the cloud. With this dramatic shift in deployment methodology, traditional ERP manufacturers were left scrambling to figure out how to get their now monolithic code bases into the new modern technology.

How did they accomplish this? This was/is accomplished by a few different methods:

None of the above are optimal and leave users either dealing with a franken-ERP where you are navigating through disparate screens and have data points within the same app that don’t even synchronize to one another. Or you are trying to run your business on a stripped-down version that is missing the nuanced functionality that your business needs to manage critical processes.

I know that was kind of a long-winded introduction to get to answering the questions of does ease of use really matter? And what makes Acumatica easier to use than the traditional ERP systems that we just described?

Acumatica is one of the few ERP systems that can truly say that it was born in the cloud. This is a very important statement because what that means is that the underlying technology was developed for the modern platform that it’s running on and isn’t disparate puzzle pieces that are retrofitted together to try to make a product.

This backbone of modern technology makes it possible for the smart people that are hired to design the user interface and the user experience to be able to do their jobs without a developer telling them it isn’t possible to do because of limitations in the technology. It also means that there is a consistency and flow to the product and standardization from the ground up.

So, once you understand how one area of the software works, that knowledge is going to translate into the other areas as well. This isn’t always true with traditional ERP systems as one module may be written in totally different code from another module. A colleague of mine who I worked with at a software company once told me that “You can’t out-train bad software design”. That’s a sentiment that I had never really thought of having spent years training people on what could sometimes be unintuitive software. But when an application is developed correctly and from the ground up, like Acumatica, you don’t need much more than the basics because it is intuitive and flows.

Finally, real-time access to data is the other main reason that Acumatica is so much easier to use than traditional ERP systems. Most ERP systems make a claim to having real-time access to data. And that is generally technically true. Any modern system will write data to a database immediately upon the transaction happening (If you’re working with a product that is doing batching of transactions then run away right now!!). But what is more important is meaningful and useful access to that data. Every system comes with out-of-the-box reports and data can be accessed with 3rd party reporting tools, assuming you have someone on staff that is versed in those tools. But every business, and sometimes every person within a business, has a need to consume information and analyze information in a variety of ways. But the ability in Acumatica for any user (with rights) to take information on the screen and slice it and dice it as they need to see it—that is a powerful thing!

If you’re like me and enjoy a good list, here’s some parting bullets of what you should be looking for when comparing Acumatica to your current (or other) ERP system:

At the end of the day we all want things that are intuitive and easy to use but are still effective. That’s true when dealing with personal products as well as business products. And Acumatica makes the world of ERP not quite as daunting as it once was. 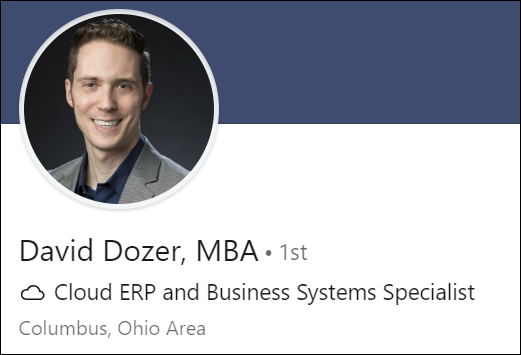