I see that there are two screens in the General Ledger module:

But I'm not sure what the difference is between them. Also, there doesn't seem to ever be any transactions listed in the Post Transactions screen in my Acumatica.

Can anyone shed some light on this?

Here is a picture of the two screens and where they are located on the menu: 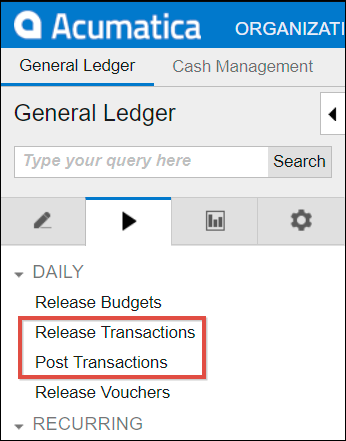 I personally like to configure Acumatica so that "Release" and "Post" mean the same thing. I even use the two words interchangeably.

I don't like to configure Acumatica to use the Post feature because, in my opinion, it's kind of pointless since you can't edit a journal entry after it's been released so you're still going to wind up posting it anyways.

If you don't ever see any transactions in the Post Transactions screen, it's probably because you don't have this feature turned on.

There is a checkbox in in the General Ledger Preferences screen called Automatically Post on Release that determines whether or not anything ever shows up in the Post Transactions screen.

If Automatically Post on Release is unchecked, then journal entries queue up in the Post Transactions screen after they have been released.

So Release comes first, then Post, in the process.

You'll also see the Automatically Post on Release checkbox in the preferences for other modules that post into the General Ledger, like the Accounts Payable Preferences and Accounts Receivable Preferences screens. It just determines whether or not journal entries generated by those modules will queue up in the Post Transactions screen.

One more thing, the Analytical Report Manager (ARM) Financial Report Writer only reports on posted transactions. So, you might release a transaction, but if it got queued up in the Post Transactions screen, then it won't be reflected in your financial reports.

Absolutely agree with you Tim, I think Acumatica has enough validation possibilities before creating transactions (such as approvals and different actions), so in my opinion it is just bottleneck to have a such kind a business process. "paranoid Accountant" is good name for this feature :)).

Ah, I see. Very interesting. I guess I'm glad that we have Automatically Post on Released checked in our Acumatica environment.

I guess this explains why when I create  a specific AR sales report it could be different if the released transactions only and completed transactions only are checked or unchecked? If so, how can I ensure that the report will always be the same regardless if any of these or checked?

It looks like the Released Transactions Only option is tied to the ARTran.Released field which would be consistent with the discussion above.

But the Completed Transactions Only option is tied to the ARTran.IsTranCostFinal field and I'm not sure what that is.

We have the Automatically Post on Release preference enabled, but we encountered a days worth of AR transactions in the Post Transactions screen in the unposted status. I'm looking for a reason why and ran into this post.

Any ideas from those on this thread?

Hi Vhasse did this happened on a period closing? That in AR the transactions were created as an example on 07-2021 but accounting was on 06-2021

@armand - It was not during a period close. But we import transactions every day from our old ERP that we are still using, so there would be multiple days/imports that a period on the transaction would be outside of the system period date.