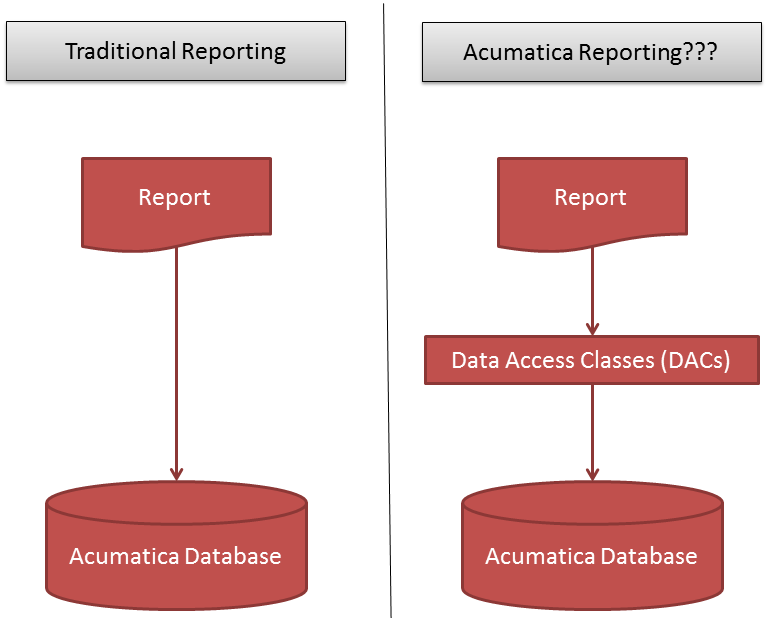 I have to admit, at first I was disappointed to learn that Acumatica has its own reporting program. I was hoping that Acumatica would leverage SQL Reporting Services (SSRS) rather than create its own standalone report designer. The reason is that there is already so much functionality built into SSRS. I didn’t see why Acumatica would reinvent the wheel.

I don’t know the technology behind SSRS that well so I don’t know much about what would have been required to integrate it into the Acumatica framework. I just know that it’s a good report writing program with lots of cool features, it’s web-based, and it has a better future than Crystal Reports (in my opinion). Acumatica Report Designer reminds me a lot of SSRS and Crystal Reports.

There is a Data Access Class (DAC) layer in Acumatica that I don’t understand yet. The picture above is what I picture in my head. Now, as far as I can tell, the main advantage (from a reporting perspective) of leveraging the DAC layer is that the report might be able to control the content that gets presented to a user. For example, the report might show sales per branch with sales on the left and branches going across the screen as columns. If a person doesn’t have access to a specific branch, the report wouldn’t show them data for that branch. I’m not sure if this is how it works, but this is how I hope it works. It would be cool to have the same report display different data depending on who is running the report.

I think there is still a place for SSRS and Power Pivot reports using the traditional reporting method pictured above, but it would be really, really cool (assuming that the previous paragraph is true) if I could leverage the DAC layer even with SSRS and Power Pivot reports. Hopefully the S130 Reports Dashboards and Inquiries course will shed some light on the subject.

Update 05/28/2015 – OData now makes it possible to use the DAC layer with Power Pivot. However, SSRS still doesn’t support OData yet which needs to be fixed. Click here to vote if you agree