This week I started the Distribution courses in Acumatica University and I’m having a great time! It’s nice to be out of the technical courses and back into learning more about the application functionality.

The first course up in Distribution is called D100 Inventory Management: Basic and it walks you through the Inventory module.

I’m still making my way through, but I couldn’t help notice that the LIFO inventory valuation method seems to be missing in the Stock Items (IN202500) screen. What’s going on? 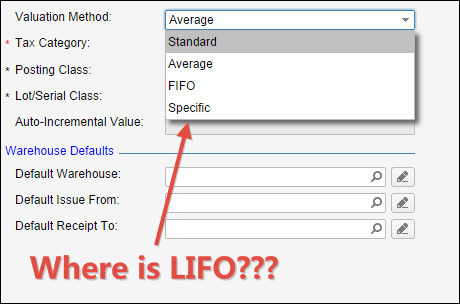 At first I panicked and thought, “o boy, maybe Acumatica isn’t ready for the big time. I mean, the Financial modules were great, but maybe they’re still working on bringing the Distribution modules up to the standard held by other major midmarket ERP products.”

Then I thought about it a little more and wondered, “does anyone actually use LIFO anymore?” After some quick Googling, it seems that they do, but it has become a contentious issue.

First, What Is LIFO?

The only times I have come across LIFO was back in college, then again when studying for the CPA exam. I remember thinking that it didn’t make any sense to me. Looking at the grocery store example above, does it really make sense to sell the new bottles of water first? Wouldn’t you sell your old water bottles first to get rid of your old inventory? Most likely, the physical water bottles that were sold were the old water bottles. But LIFO still allows you to value your inventory using the old costs. It doesn’t make sense!

LIFO is like stack parking. When I lived in Los Angeles, it was a widely known fact that you try to avoid stack parking as much as possible. Many parking garages have long parking spots that fit more than one car. If you are behind the first car, then you have to give your keys to the parking attendant which many people aren’t comfortable doing. With stack parking, the last car in must be the first car out. LIFO is a great way to explain stack parking, but not inventory movement/costing. 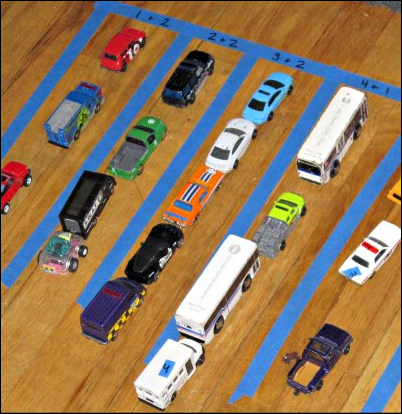 Now, moving on to the Googling that I did and the fact that this seems to be a pretty contentious issue…

First, I found a 2009  article from the accounting authority publication of Journal of Accountancy called The Death of LIFO? (click here). It claims that LIFO is not widely used, except in the United States. However, even the accounting rules in the United States are now heavily influenced by the fairly recent IFRS (International Financial Reporting Standards) rules. And LIFO is not accepted under IFRS. Then there is an IRS (Internal Revenue Service) LIFO conformity rule (IRC § 472(c)) which requires that a company using LIFO for tax purposes also use LIFO for book purposes. But, if LIFO eventually becomes outlawed for book purposes because of IFRS influence on US GAAP, then it wouldn’t be allowed for tax purposes because of the IRS conformity rule. Bottom line, are we looking at the death of LIFO?

Next, I found a 2013 article from The Journal Gazette in Fort Wayne, Indiana entitled, Is LIFO as we know over? (click here). It talks about a provision in President Barack Obama’s 2014 budget proposal that calls for the end of LIFO. Then it goes on to lament the impact that it would have on local businesses. Finally, it concludes that many companies are resigned to the fact that we’re almost at the end of LIFO.

Here is a more official link on the US Treasury website describing the 2014 fiscal year proposal to repeal LIFO in the United States (click here). Take a look at page 88.

Then there is KPMG’s take on the 2014 budget which was transmitted by the White House to Congress on April 10th, 2013 (click here). Take a look at page 36 where the KPMG observation states, “If use of the International Financial Reporting Standards (IFRS) becomes mandatory, companies would be forced to discontinue using the LIFO method for financial reporting purposes.”

Apparently this has become a hotly debated topic. There is even a website devoted to saving LIFO (click here).

I couldn’t find any articles talking about whether or not the 2014 budget provision passed in Congress last year, but I assume it didn’t because the 2015 budget contains the same proposal, now on page 93 instead of page 88 (click here).

So, it appears that the issue is not yet settled. However, with IFRS, the Obama administration, and the SEC all joining in the hunt to eliminate LIFO, it appears that LIFO won’t be around for much longer.

I personally have no idea, but I think it’s fun to guess. Here are some of my guesses:

So What’s The Big Deal About LIFO?

Personally, I don’t really think it matters that Acumatica doesn’t include LIFO. If they ever pick up a customer that requires it, I’m sure they’ll add it. In the meantime, it doesn’t appear that Acumatica supports LIFO. And if things keep going the way they’re going here in the United States, maybe they’ll never need to.