It’s amazing how easy it is to overlook and take for granted things that are right under your nose but that have become too commonplace to penetrate your radar of consciousness. The washing machine that has virtually made washing clothes by hand obsolete in developed countries, the ability to auto-pay your bills without having to devote an entire evening to a mundane check-writing task every month, or the amazing ability to step on a plane and get virtually anywhere on the planet within 24 hours while your only worry is deciding which television channel to watch.

These things are under-appreciated, but if you ever needed to wash your clothes in bucket, hand-write a batch of checks, or take a steam ship to an international destination, then you would appreciate what you have, what is right in front of your nose.

It’s so easy to become spoiled, until something happens that makes you appreciate what you have.

Such was my condition until The Best Enterprise-Class General Ledger Accounting Software of 2016 article from PC Magazine landed on my computer screen.

In the world of Enterprise Software, it’s so easy to get caught up in chasing features that you forget the real world impact of what is already available to you. It’s easy to forget how many companies are still running Accounting Software that cannot do simple things like “wash clothes”, “pay bills”, and “fly”.

Thank you PC Magazine for reminding me.

For those accountants out there, I get you. Takes one to know one right?

When I discovered Accounting in college after taking my first Accounting course based on a recommendation from an academic counselor, I was thrilled. Here was a world where everything made cents (get it?), everything fit together perfectly. I mean, isn’t it awesome that the debits always have to equal the credits!?!

Learning Accounting opened a door for me into a world that I never knew existed. I now understood the language of business. I could skip the glossy non-sense in a company’s annual report and dive into the financial statements, even digest the footnotes!

Alas, after I graduated college and entered the “real” world, I discovered that Accountants are not as appreciated as I had hoped.

I began as a financial auditor for Deloitte and Touche so I got an inside look at the Accounting departments in many different companies. It seemed like the Accountants always had the worst offices even though they worked the most amount of hours. No one really knew what they did so they were ignored, put in the corner.

As auditors, we experienced the same thing. We would get put into tiny offices (that were really just closets), sometimes with leaky pipes. Maybe the room had air conditioning, but maybe it didn’t. If it didn’t, you would have to bring your own fan. And hopefully no one would accidentally point the fan at a stack of audit papers that you just spent hours organizing.

The Accounting department is known as the “back office” or the “no one really knows what they do” office. Accounting is often viewed as a necessary evil, nothing more than a cost of doing business.

And I continued to experience the same thing, even after I got my CPA license.

It’s no surprise that Enterprise Software has focused on the front office first. Just look at CRM solutions like Salesforce and Microsoft Dynamics CRM.

In the move to the Cloud, Front Office CRM software has taken the lead while Back Office ERP software has been much slower to get adopted in companies.

But things have been changing recently. ERP is now rapidly moving to web-based software. The question is which one do you choose?

If you are an Accountant and your company is in the market for new ERP Software or new Accounting Software, then I encourage you to assert yourself during the process. Make your voice heard. It’s your right!

This is your opportunity to have a say in an important decision. What software you select will have a big impact on your daily job. It can make the difference between taking weeks to close the month vs. only days or hours.

Acumatica can make a huge positive impact on the daily job of an Accountant. Acumatica should be on the short list for any Midmarket company looking for new ERP Software or Accounting Software (in my opinion).

But don’t take my word for it, take a look at the recent review by PC Magazine of The Best Enterprise-Class General Ledger Accounting Software of 2016. In it you will find an objective review of the current options out there for Accountants in Midmarket companies and you will see that Acumatica comes out on top. Or, more specifically, “comes out on left“. 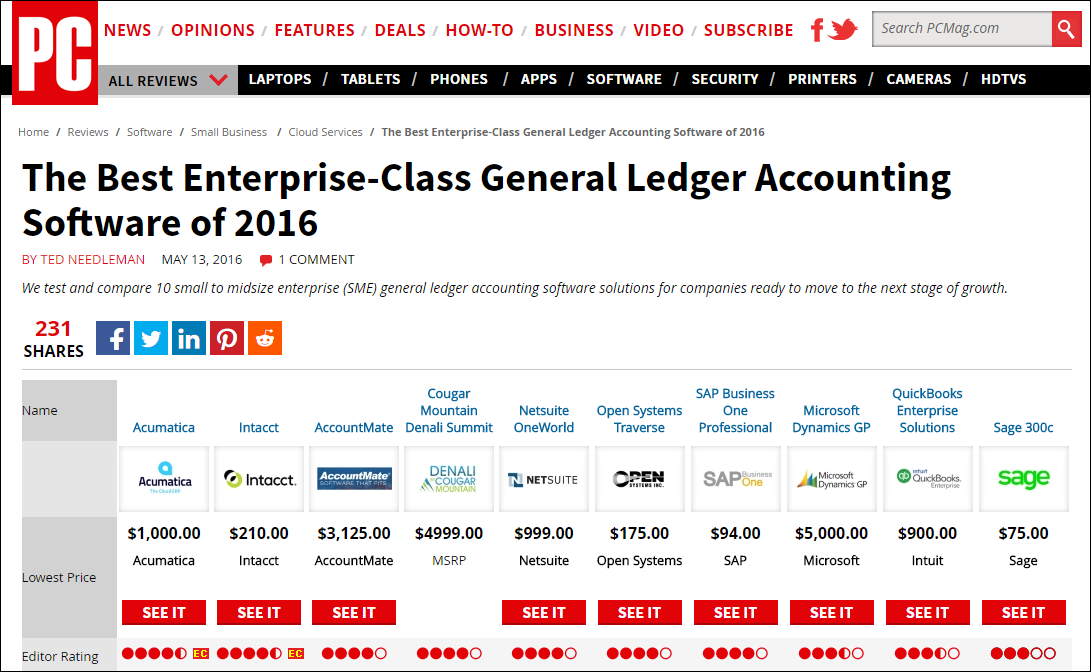 The General Ledger is the core of any ERP Software solution. It’s the destination (or “graveyard”) of every transaction.

It’s important that you invest in a system that gives you the ability to configure the General Ledger the way that you want, the way that makes the most sense for your company.

In this post, I’d like to point out some of the flexibility that Acumatica has with configuring the General Ledger Structure.

The General Ledger Structure is first defined in the Segmented Keys (CS202000) screen.

There are two pieces to the General Ledger Structure that you can see in this screen.

The first is the Natural Account and the second is the Sub-Account.

You can configure each segment within the Natural Account and Sub-Account according to the different options available to you.

You can determine the length of each segment.

You can determine if a segment will accept letters (Alpha), numbers (Numeric), both letters and numbers (Alphanumeric), or virtually any kind of character that you want (Unicode).

You can determine if a segment is Validated, meaning that a user can only select from a list of possible values.

If a segment is validated, then the list of possible values is defined on the Segment Values (CS203000) screen. 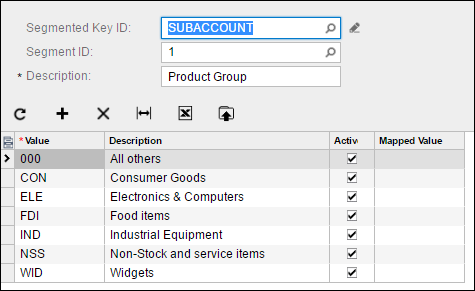 If the Validated checkbox is not selected, then the segment is basically free-form, only subject to the limitations of the Length and Edit Mask.

Or you can choose to have the values automatically numbered by selecting the Auto Number checkbox.

And you even get the ability to choose what Separator is used to visually separate segments when they are displayed to the user.

For Sub-Accounts, if you want to allow any possible combination of segment values to be entered, then you can check the On-The-Fly Entry checkbox. Otherwise, you can uncheck the box on the Segmented Keys (CS202000) screen…

… and use the Subaccounts (GL203000) screen to define all of the valid combinations of Sub-Account segments. 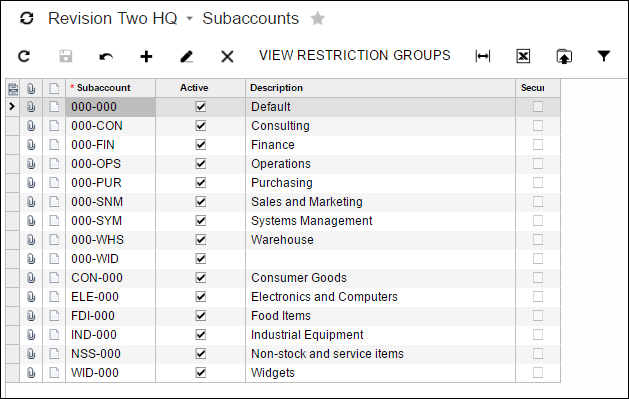 The option to default Sub-Accounts to different values can be found throughout the system using “hooks”. For example, you can use the following “hooks” to default the Freight Sub-Account segments on a Sales Order. 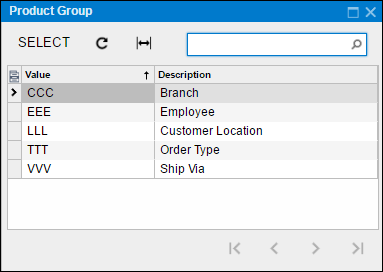 You can default the Sub-Account segments from all sorts of different places, yielding a near-infinite combination of possible configuration options for your General Ledger Structure in Acumatica.

So, as you can see, Acumatica loves accountants.

But don’t take my word for it. Take a look at what PC Magazine has to say.

And if you didn’t read their article yet, here is your last chance to take a look.

AUGForums.com is the most trusted independent online community dedicated to Acumatica Cloud ERP and CRM. 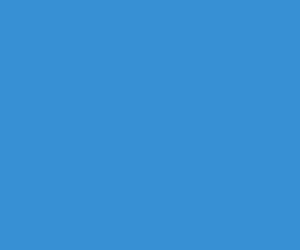 Copyright © 2020 · AUG Forums, LLC. All rights reserved. This website is not owned, affiliated with, or endorsed by Acumatica, Inc.