Recently, on November 18th, Acumatica announced that it had raised $10 million in funding. At first $10 million didn’t look like that much to me because Xero, a SaaS ERP product aimed at smaller companies, announced on October 14th that they had raised $150 million in funding. However, the problem with Xero is that they are still not profitable, while Acumatica CEO Yury Larichev claims to be already profitable with the comment, “We do not need more funding because we are already making money.” However, the latest funding will enable Acumatica to continue its aggressive growth strategy (they are on track to grow 350% again this year).

Another comment in the announcement caught my attention. An early Acumatica investor says, “We see Acumatica growing to more than a billion in revenue in less than 10 years.”

When I saw the one billion revenue number, it got me wondering about the other major players in the ERP market and how much they do in annual revenue. According to the graphic below from Gartner, here is a breakdown of the market share for the worldwide ERP market. I decided to focus on SAP, Sage, and Microsoft since they are the major players that I’m most familiar with. 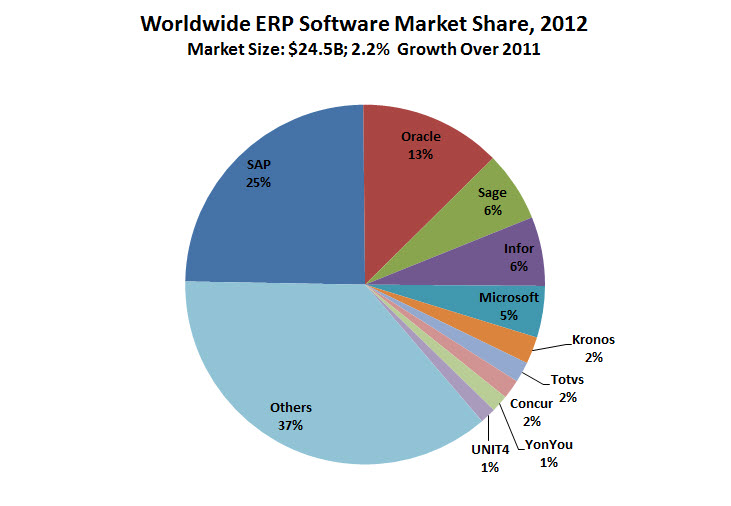 SAP is the cadillac of ERP products. They provide the most sophisticated (and expensive) solution. It looks like their most recent annual revenue number is about $18 billion (I multiplied 13.165 by a recent exchange rate of 1.37 USD per EUR). I excluded the consulting dollars because Acumatica doesn’t provide consulting, instead choosing to rely on their partner network (which I think is a great idea).

I’m most familiar with Sage because most of my ERP experience is with the Sage 500 product. Sage is a UK-based company that has a number of different business software products. It looks like their most recent annual revenue is about $2.2 billion (I multiplied 1.376 by a recent exchange rate of 1.63 USD per GBP).

Microsoft doesn’t publish revenue for the Dynamics division which includes their CRM and ERP products, but it looks like a good estimate is between $1.2 billion and $1.7 billion.

Bottom line, if Acumatica can get to the point where they are doing $1 billion in annual revenue, they will become one of the major players in the ERP market. This is especially true due to the following facts: