Many of you who read this blog already know, but I wanted to do a post anyways to explain that April 7th, 2017 was my last day as an employee of Acumatica.

It was a fun ride, a little over one-and-a-half years, and I learned a lot.

I learned a lot about the Acumatica product. Although I focused on the Finance and Distribution modules, I got experience with other modules as well, like Manufacturing and Field Service.

Acumatica is very much a horizontal solution. So there is a lot to learn.

I also learned a lot about what it’s like to work for a software company. On the surface, it’s “just a bunch of people with laptops.” But there is a lot more involved when you get under the hood. It takes a solid team to bring a software product (especially an ERP product) to market.

It was a lot of fun, especially teaching classes like I got to do in Seattle, DC, Orlando, San Diego, and even Germany.

I like to say that being forced to teach something is the best way to learn it.

The team that I was on was the Implementation Assist team. We would jump into different implementations in various capacities.

Sometimes it felt like being a firefighter, just trying to contain and put out a fire.

Sometimes it felt like being a surgeon, making important decisions that would determine the life or death of a project and operating with a lot of time pressure and a little sleep.

Sometimes it felt like riding shotgun on a stagecoach, not really doing anything except staying on the alert, watching for any problems to pop-up so you could shoot them down.

I got to work with a lot of partners and a lot of customers.

It was a great learning experience to observe how different partners run implementations.

It was also a great learning experience to work with a variety of customers in a variety of different industries.

The Implementation Assist team had been operating as a remote team for about 6 months. Communication took place by email and by Skype, with phone calls as needed. And travel as needed.

I lived in GoToMeeting, spending most of my time on the phone with Customers and Partners, sharing screens and moving implementations forward.

Everything I did was remote.

And I embraced it. It felt like I was part of one big virtual office.

There were also a variety of personal reasons that made working remotely very important to me, especially at this point in my life. It was a good balance to the natural eb and flow of the consulting lifestyle and, most importantly, it allowed me to go back to San Diego when needed which is very important to me right now. More on that here

Honestly, working remotely became the most important thing to me at Acumatica.

And I was happy to be working for a company that was very distributed where, I’m not 100% sure, but I’m pretty sure, more than 50% of the US employees report to someone in another city, another state, or even another country.

“Just a bunch of people with laptops.” And Skype. And GoToMeeting. And phones.

But I got blindsided right after the recent Summit in San Diego when it was decided that the Implementation Assist team I was on would no longer be remote. It would now be an “in office” team.

I was really angry at first. I spent the last four years learning Acumatica and felt that I was just beginning to hit my stride.

But I understand that Acumatica is a growing company and, as they hire more and more people, they want to consolidate those people into offices.

I tried to work something out, but quickly learned that it was a non-negotiable requirement.

So, I began to look for a new job, one that would allow me to work remotely, with travel as needed.

It took a lot of time, a lot of energy, and a number of sleepless nights considering which option would be best.

In the end, I decided to go to work for a software company that provides a full-stack of software to the senior care / assisted living market.

Basically, I get to verticalize Acumatica Financials for the senior care / assisted living market. It’s a fast growing market with a lot of potential, especially as all the baby boomers retire. Actually, it’s kind of ironic that Acumatica, ERP for millennials (click here), is about to become the leading Financials solution for senior living communities that care for aging baby boomers 🙂

So, while I was sad to be leaving Acumatica, I’m very much looking forward to doing cool things in my new job.

I started the new job a couple of weeks ago, but I thought it would be appropriate to do this post today since today is the four year anniversary of my first post on this blog.

Also, one of the advantages of the new job is that I have the freedom to do Acumatica consulting on the side. 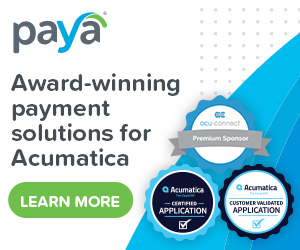